Melatonin as a potential compound against SARS-CoV-2

After the effort of Diamond team to crystallize several fragments on the main protease of SARS-CoV-2 (PDB ID: 6YB7), we decided to screen FDA approved drugs for similarity with these fragments. We found out that melatonin shares common moieties with fragment x0104, which could make it a good candidate to fight this disease.

In order to evaluate the capacity of melatonin to bind to this target we ran an in silico binding assay using ACEMD platform, with the AdaptiveGoal protocol.

As shown in the video, we were able to see the binding event and the behaviour of melatonin (shown in green) in the cavity of the main protease of SARS-CoV-2, which looks promising, as it partially overlaps with the crystallized fragment, shown in grey. Trajectories are available here.

We have submitted this compound for further validation here. A similar submission has been previously proposed by John Chodera here.

A library of FDA approved drugs was downloaded from Enamine Store. Fingeprints were computed with RdKit's function Chem.RDKFingerprint for all the molecules in the library, as well as for the fragments that had crystallized to the main protease of the virus, available here. Finally, we computed similarity for each possible pair and the we decided to focus on melatonin, given its similarity to fragment x0104.

The protein (Mpro-x0104) was protonated at pH 7.0 using ProteinPrepare, to be then modeled using the AMBER99SB force field. The ligand (melatonin) was modeled with the general amber force field (GAFF) using Parameterize. The ligand was placed in the bulk in a random orientation. The complex was then solvated with TIP3P water molecules and neutralized.

3 nanoseconds of equilibration were run at 310K using ACEMD. Constraints on the heavy atoms of the protein were applied during the first half of the equilibration, 1 kcal * mol−1 * Å−2 for the alpha carbons and 0.1 for all others. This equilibration step was followed by 10 ns of simulation under production conditions (no constraints). This production simulation was used as the generator of our AdaptiveGoal protocol.

AdaptiveGoal protocol runs several simulations in parallel, and when a given number of simulations finishes, new simulations are launched. The key is that this new round (or epoch) of simulations starts from one of the frames of the previoulsy finished simulations. The protocol assigns a score to each frame, and the new round of simulations starts from the frames with highest score. The score of each frame is computed by an arbitrary, user-defined function. In this case, we gave a score of 1.0 to every frame where the ligand was closer than 20.0 Å to the binding site (defined by the location of Histidine 41 in the original structure) and the value of that distance multiplied by -1 if it was further away. Hence, once the ligand enters the sphere of 20 Å centered in the binding site, subsequent rounds of simulations will focus on exploring that area. This helps saving GPU time.

In the picture below, the 5 macrostates identified by our analysis are shown. Fragment x0104 is shown in bold Licorice for reference. Different lag times and number of macrostates were tried when computing the markov model. In all combinations tried, the green macrostate overlapping with the fragment was always present, which is, again, a good sign that suggests that this compound could bind in that area of the protein. The other macrostates shown are also resilient to changes in the aforementioned parameters, particularly, the red one.

All the code is available in our github repository.

We will keep posting updates in this page on the status of this and other proposals. If you want to contact us for more information on this project, feel free to email us at covid19@acellera.com! 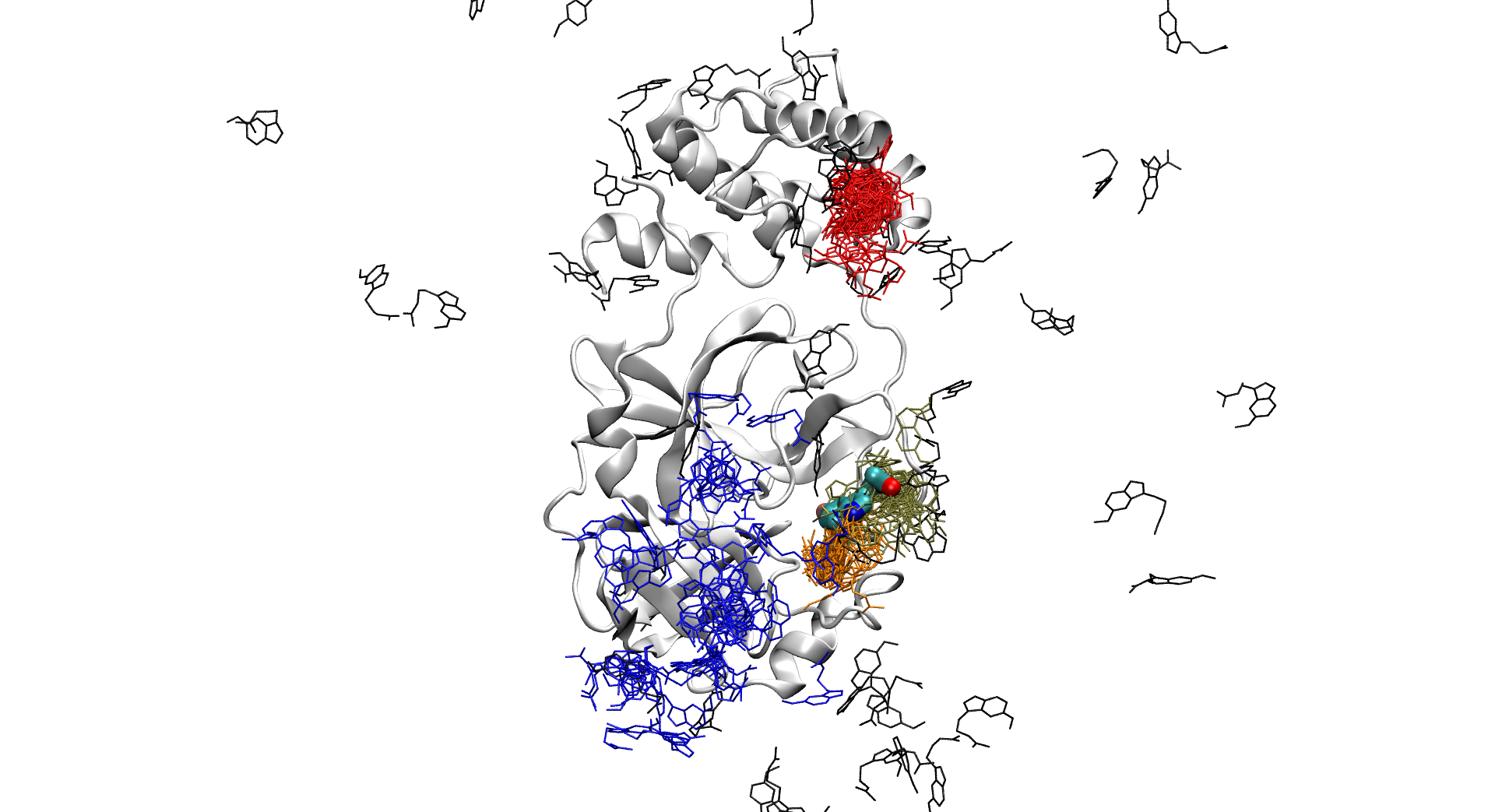 alejandroIn silico binding assay against SARS-CoV-2 main protease04.14.2020
We use cookies to ensure that we give you the best experience on our website. If you continue to use this site we will assume that you are happy with it.Ok